Rome is a fantastic city to explore, because so much of what you want to see is clustered in quite a small central area and can be covered easily on foot.

Without a doubt, however, at some stage during a visit you are likely to be grateful for a chance to use public transport of some kind, if only to get from A to B a bit more quickly, or to start your sight-seeing from somewhere different.

The Roman transport system is cheap, frequent and generally very reliable – although for these reasons you must often be prepared to share it with rather a lot of other people….

The good news is that the same tickets are valid for both the Metro and also buses and trams above ground (the official ATAC city ones at least). The extent of their validity depends on the type of ticket you buy:

·        A single one-use ticket (BIT -  price 1.50 euros) is valid for 100 minutes (from the time it is first stamped) and may be used for one Metro journey, or unlimited bus travel within that time. There is now also a new option to buy a ticket with similar 'rules' but which can be reactivated for another 100 minutes up to 10 times - the 10-BIT. This costs 15 euros and is quite an attractive option compared with the CIS: see below.

·        A FULL-DAY ticket (Roma 24H, currently 7 euros) gives you unlimited travel on all bus and Metro services until midnight on the day of its first stamping - excellent value really.

·        Even better value is a WEEKLY ticket (called a CIS - currently 24 euros),which extends your unlimited travel time to 7 days.

Longer monthly passes (36 euros) are also available. If you buy a 'ROMA-PASS' (for entry to museums etc.) public transport for 2 or 3 days (32/52 euros) is also thrown in; these can be worth it, but it really depends which museums and galleries you want to visit.

The easiest way to buy these tickets is at the multi-language self-service machines widely found at Metro stations. With the tickets of longer duration, you need to fill in some personal details on the back, so that you can prove it's yours if an inspector stops you.

When you first use it, the ticket gets stamped automatically as you pass through the Metro platform-barriers (and then needs no further validation); if your first journey is on a bus, you need to validate it yourself in the little yellow box fitted (somewhere) in each bus or tram designed for this service. 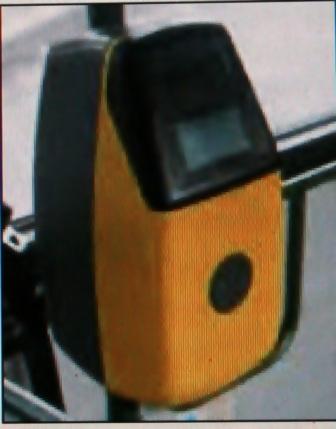 Spot checks are done on the bus-routes to check that you have a validated ticket (unstamped ones don't count!). 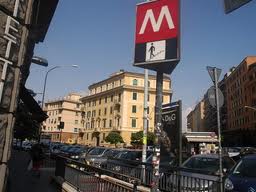 At the moment, there are 2 lines in use (imaginatively called "A" and "B"); a third one has been under construction for at least 15 years; parts of it are now in use, but it is unlikely to open fully any time soon.

The two lines are renowned for very rarely going anywhere near anything you actually want to see (there are a couple of useful exceptions which I'll mention later): this is understandable to a large degree when you consider the amount of archaeological remains that had to be cut through when they were being built, some of which were simply too important to disturb (which of course is what is holding up Line C). 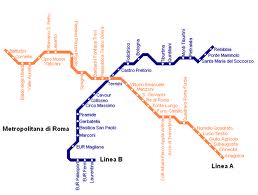 For this reason, the lines were mainly designed in the end to carry workers to and from the suburbs. They cross at the city's main railway station ('TERMINI' - named after the nearby ruins of the Baths ('T(h)ermae' of Diocletian, not anything to do with the word 'Terminus'!),and the only stations really close to any of the 'big sights'  are SPAGNA on Line A (for the Spanish Steps) and COLOSSEO on Line B (for St Peter's… only joking!) CIRCO MASSIMO is also pretty close to its namesake.

Most of the other stops involve an up to 10 minutes' walk before you reach a "nearby" attraction - for example, "OTTAVIANO" and "BARBERINI" share their billing on the route-displays with "St Peter's" and "The Trevi Fountain" respectively, but (despite what the on-board soundtrack which plays as you approach each station tries to claim…) you still have a fair distance to walk before you get close to these delights.

Line A (always shown by the single letter A in a red background: A) is due for a clean-up this year (2022); it generally runs deeper underground. Most of the carriages on Line B are now in reasonably good condition also. Apart perhaps from Sundays and other 'festivi' when the wait may be a little longer (not to forget the odd 'sciopero'...),you rarely have to wait as long as 10 minutes for a train.

There is a vast array of buses run by the official "ATAC" city transport body, which can generally be told apart from tourist buses by their distinctive new silver-grey colour - although you may see some of the more ancient ones which are a deeper orangey-red.

Again, they are mostly very frequent (some of the more popular routes run every 5 minutes or so) and reliable, which is quite an achievement given the general chaos on most of Rome's roads. Typically, they have 3 doors - you are traditionally supposed to "board" at the two ends, and "alight" in the middle, but hardly anyone bothers about this anymore. There is usually quite a lot of 'standing' space compared with the actual number of seats: Romans often prefer to stand even when there are seats available; and as the buses can get very crowded with people standing in this way it is advisable to edge your way to one of the doors in good time (you'll hear the constant phrases "Permesso!" or "…scendere…" from people blocked in who have left it a bit late!).

Displayed on the 'posts' at bus-stops is often a list of the key places on the route, with the one you are at circled. Since the places are often no more than street-names this is not always all that helpful, but it's better than nothing if you're trying to pick the right bus for you. It's a good idea to scan down the list and look for the names of a big landmark or terminus in the direction you want to go: ones likely to be useful are "Venezia" (Rome's main central 'square'),"Termini" (the railway station, also where many bus-lines begin and end) and "S. Claudio" or "Chigi" (another important crossroads, where Via del Tritone meets the Corso halfway up).

Increasingly nowadays there is also an electronic display showing how soon the various numbered buses are likely to arrive, or how many stops away they are.

Your ticket is valid on pretty much every bus you are likely to meet in the centre of the city (many have a number written in Blue, with the letter 'U' for 'Urbana' in front).

Two exceptions, which need special tickets, are the Tourist Open-top Route 110, and the so-called 'Archeobus' (these are easy enough to spot, and (I would advise) avoid). Useful routes going between many of the important sights include numbers 62, 40, 64, 70,71, 75, 85, 175 and 'H' - but don't be afraid to experiment! The beauty of your unlimited ticket is that if the bus you are on takes an unexpected turn, you can always just hop off and try a different one!

Happily, many of the mini electric buses (e.g. 100, 117, 119) which travel around central areas are now back in service (the most lamented exception is Bus 116 - there is still a webpage describing its old route elsewhere on this site kept active for 'sentimental reasons'!). These are great fun (if somewhat bumpy!): they weave their way through the unbelievably narrow streets of the 'Centro Storico', often attracting amazed and envious looks from tired tourist groups as they clatter past. I strongly recommend trying them - but again be prepared to have to stand for a good part of the journey! 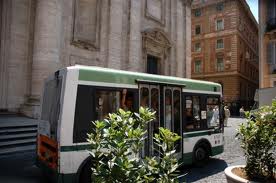 Rome still has a fully-functioning tram network, and your ticket is also valid on these. Many of the routes, it's true, run around the periphery of the city rather than through the centre, but there are some exceptions: Tram 8 runs from the city-centre in Piazza Venezia across the Tiber into Trastevere; Tram 19 takes you across the North of the city, passing near to a couple of the otherwise hard-to-reach main churches and having one terminus very close to St Peter's; Bus 3 used to be a tram, and still runs along the tramlines: this is a useful route which goes right past the Colosseum. Another one you may find useful is Tram 2, which travels up the Via Flaminia towards the Auditorium concert-halls and the award-winning modern art gallery MAXXI.