Why not create your own Roman-style feast?

Here are some recipes for the dishes (some more authentic than others...) that have been served, with periodic additions or variations, annually for many years to the Summer-term Leavers at a well-known Prep School near Newbury. 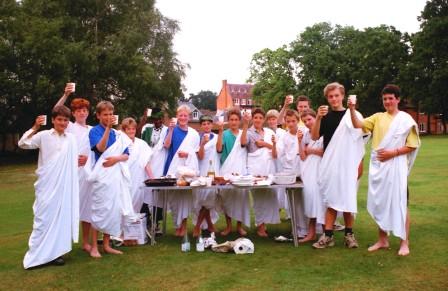 Click on the links in the box below to jump quickly between the sections of this page.

A Word about the Recipes

Wine recipe: A Toast to the Gods

We know from Classical authors (above all 'Apicius' - whoever he may have been!) that a Roman dinner-party followed several conventions:

·       They generally reclined, on their left side, on couches arranged around 3 sides of a central table (leaving one side free for service)

·       Special garments and wreaths for the head were worn

·       Wine was served mixed with water, in a proportion decided by one guest-of-honour

·       The Romans never used forks! There were knives available (although slaves usually presented the food ready chopped to be picked up by hand) and spoons to collect the sauces.

A much wider variety of food (especially in the Main course) was eaten than we are used to today. Romans were not squeamish in trying out unusual or exotic meats: you could say that if it moved, the Romans would try it to see if it tasted good..! For this reason, I have had no qualms about producing dishes from meats unknown in Roman times: I'm sure they would have tried them if they had known!

Many recipes used a kind of relish, either cooked in during preparation or served as a sauce. This was called 'garum' and was made from pickled and fermented fish-guts. It probably did not do much more than add a saltiness or piquancy to the dish, in the same way that we might add Worcester Sauce or anchovy paste. Due to the general unavailability of this ingredient in modern food stores, I have found other substitutes for these recipes…!

It may also be surprising what key ingredients the Romans didn't have or use (especially considering Mediterranean staples today). They used olive-oil instead of butter and for many other purposes, as indeed do modern Italians; but they used honey instead of sugar, and had no tomatoes, potatoes, distilled spirits, cocoa or coffee products, pineapples or other exotic fruits, and were unlikely to have made 'pasta' as it is understood today…I think a modern Italian would be very taken aback if he found himself transported in time to the kitchens of his ancestors! Hot food was rarely consumed except at this particular evening meal (breakfast being little more than bread, fruit and water; lunch was most often 'cold cuts' from the night before). On the other hand, they are thought to have invented something very much like the 'burger'! 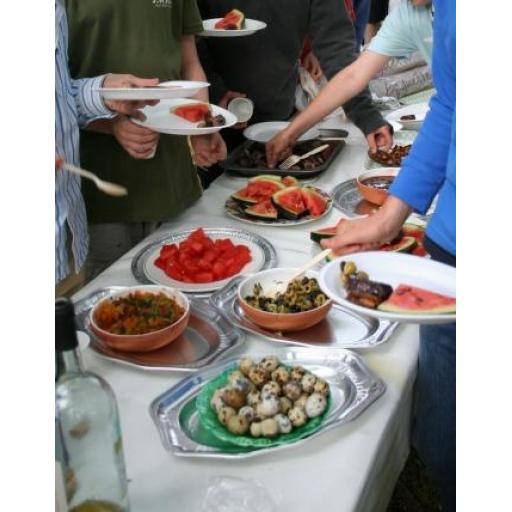 This bears a strong resemblance to modern-day Italian 'antipasto' or Spanish 'tapas'. They would serve small 'tasters' of dishes based around salad, vegetables, pickles, olives, eggs and small fish & seafood. Often also to be found at this stage were milk-fed large snails and stuffed dormice. As with the main course, olive oil would have been a constant accompaniment.

The left-overs from these would be quickly cleared away, and the slaves would then bring forward the more substantial dishes for the main course. 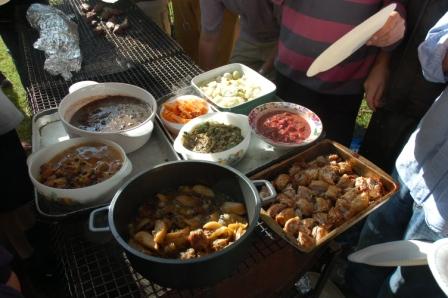 This would consist of all types of roasted or stewed meat from animals, birds and fishes. A much greater variety would be served than we are used to: favourites ranged from small song-birds of the kind still eaten in some parts of Europe today to large flamingos and even ostrich, and all kinds of game-birds. Big fish such as turbot were especially prized, and as well as more familiar ones such as red mullet they also enjoyed eels and lampreys. Strong meats (e.g. wild boar, mutton and goat) were regulars at the table along with all those still served today. Vegetables too were presented often with inventive and spicy sauces. The sweet taste of honey would be found alongside piquant herbs and the salty garum-sauce; one very distinctive flavour was that of ground lovage-root (in flavour and scent quite close to celery-seed). We know too that some meats were ground up and cooked with herbs and seasoning, and then served with bread and oil - sounds familiar?

Modern Italian cookery tends to separate sweet flavours from savoury ones - it's why Italians are not keen on English food: meat cooked with fruit sauces?  Sweet suet puddings on savoury kidneys? Once again, the Ancient Roman style would have seemed very unusual, especially with the pervading honey-flavours.

A succession of these dishes would be brought in by the slaves; by the end of the course however there would often be so much 'debris' left over that rather than clear it away, taking quite a long time, the whole table would be carried out to be dealt with away from the guests, and replaced by one already prepared with the food for the dessert course; hence its name:

Although the Romans did often enjoy pastries and cooked puddings (an egg-custard - which could actually be a savoury dish too - was often eaten with baked fruit), in general this course revolved around fresh fruit and nuts of all kinds.

A WORD ABOUT THE recipes

The following recipes make little attempt to reproduce exactly what Romans really were likely to eat (a modern schoolboy tends to baulk at dormice and giant snails). This is simply what was found convenient to prepare and enjoyable to eat - basically for a post-exam party - to give a 'flavour' at least of living like a Roman…!

Many thanks to Apicius for his inspiration in these adapted recipes - and also to the pupils over the years who have helped prepare - and been themselves prepared to try - them!

N.B. Unless the exact quantities of the ingredients are crucial to the dish's success, I have not attempted to prescribe them precisely; you can judge amounts needed by how many guests you are expecting, and adjust accordingly. Basically you should be able to tell by tasting if the dish needs any more seasoning or sweetening - don't be afraid to taste as you go along!

CLICK ON THE LINKS BELOW TO GO TO THE PAGES OF RECIPES FOR EACH COURSE - OR USE THE MENU ON THE LEFT.

Here below is a recipe for Spiced Wine which you may wish to try first!

TOAST TO THE GODS

This recipe is basically from Apicius.

Ingredients:    Dry white wine (quantities based on 2 litres)
Honey (approx 1lb to every 2 litres)
2 dates
A small handful of peppercorns
A couple of cinnamon sticks
2 dried bay leaves
A large pinch of saffron

(The pepper, cinnamon & bay can be substituted with ground-up
equivalents - this makes a cloudier wine, but with more flavour!)

Stone and chop the dates and add to a cup of the wine. Allow to steep for an hour or so.

Heat some of the wine together with the honey, stirring until it has fully dissolved; then combine with the remaining wine in a deep dish or saucepan.

Pour in the cup of wine and chopped dates. Add the remaining ingredients (if using ground versions, about a teaspoonful of each).

Bring to the boil slowly, stirring all the time, and then leave to simmer gently on a low heat for an hour. After this time, skim off the honey-froth, strain, and allow to cool. If you have used the ground ingredients, the wine will need straining several times - allow sediment to settle before each pass.

This method should produce a deep yellow-coloured sweet wine with flavours of spice and lemon. It can be served neat (as a 'Toast to the Gods' before the meal), or watered to taste and drunk throughout the meal.